I have neglected my blog, not because I have faded into non existence but I have been so immersed in my physical reality.

Early in 2015 I had to vacate the space I had been inhabiting for the previous four years as the demolition crew came in and this happened to my studio, I was literally loading the truck as they were removing the roof!

Look how nice it was before all the earth came out of the ground!

Luckily opportunity arouse and I moved my operations to the country to an ex MOD site that had lain dormant for ten years.  It was damp had no services, no water no electricity and I have never seen such an expanse of spider webs.

It was shelter but it felt like we had gone back in time.  I became aware that running water and electricity, something we take for granted, is a luxury not universally present. Installing solar panels to charge batteries propelled us into the future and the space was gaining functionality.  Making it habitable was a huge undertaking but after several months I had the best environment for making art I could imagine.

Once vaguely habitable I set about making art.  It was hard to remember where I left off but laying out my salvaged ingredients ideas started flowing and pieces began to form. 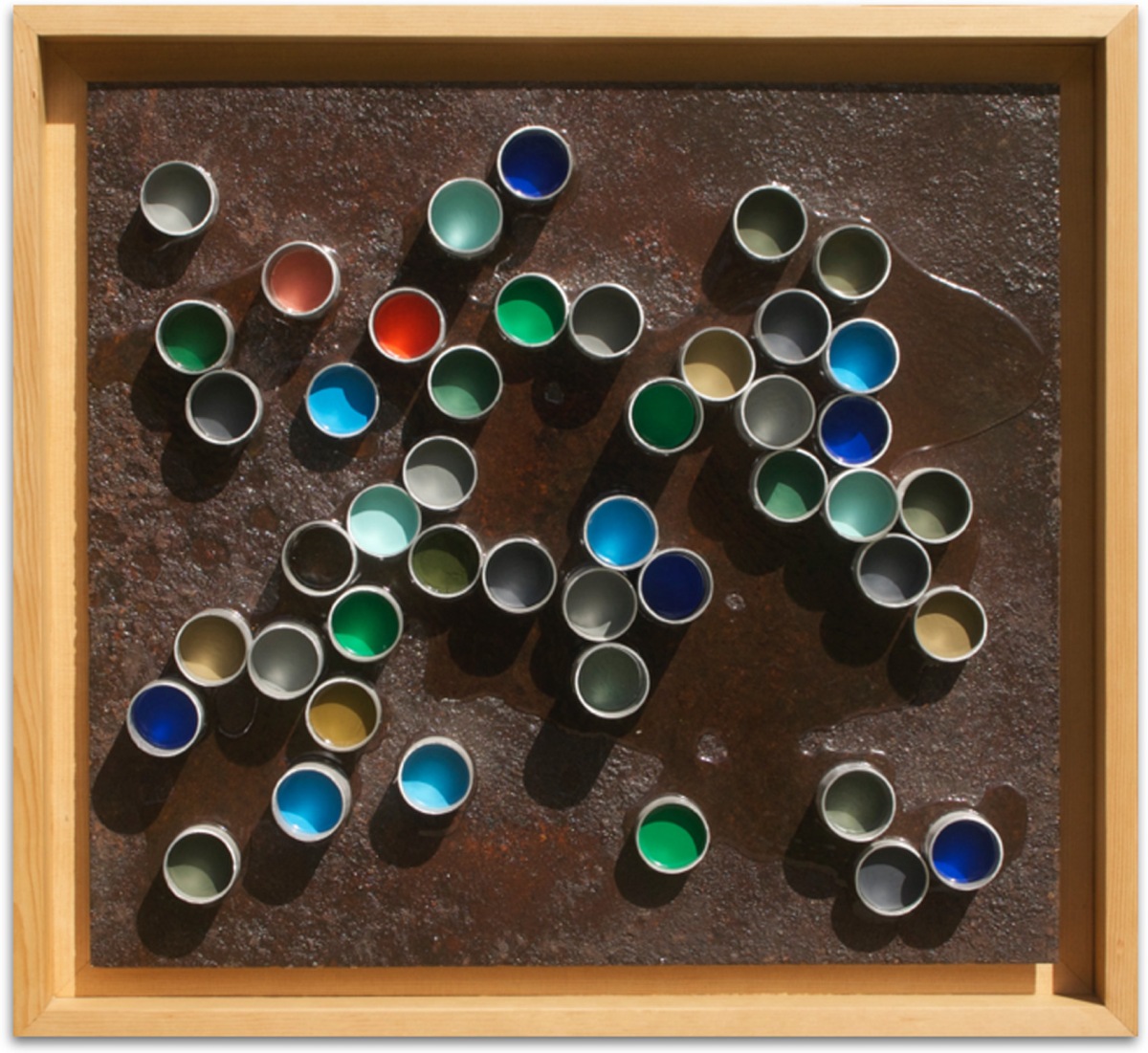 Threats of violence from authorities, what makes the establishment different from gangsters is just that, they have long since established their system of governance, which came about through violence and is maintained by the threat of it 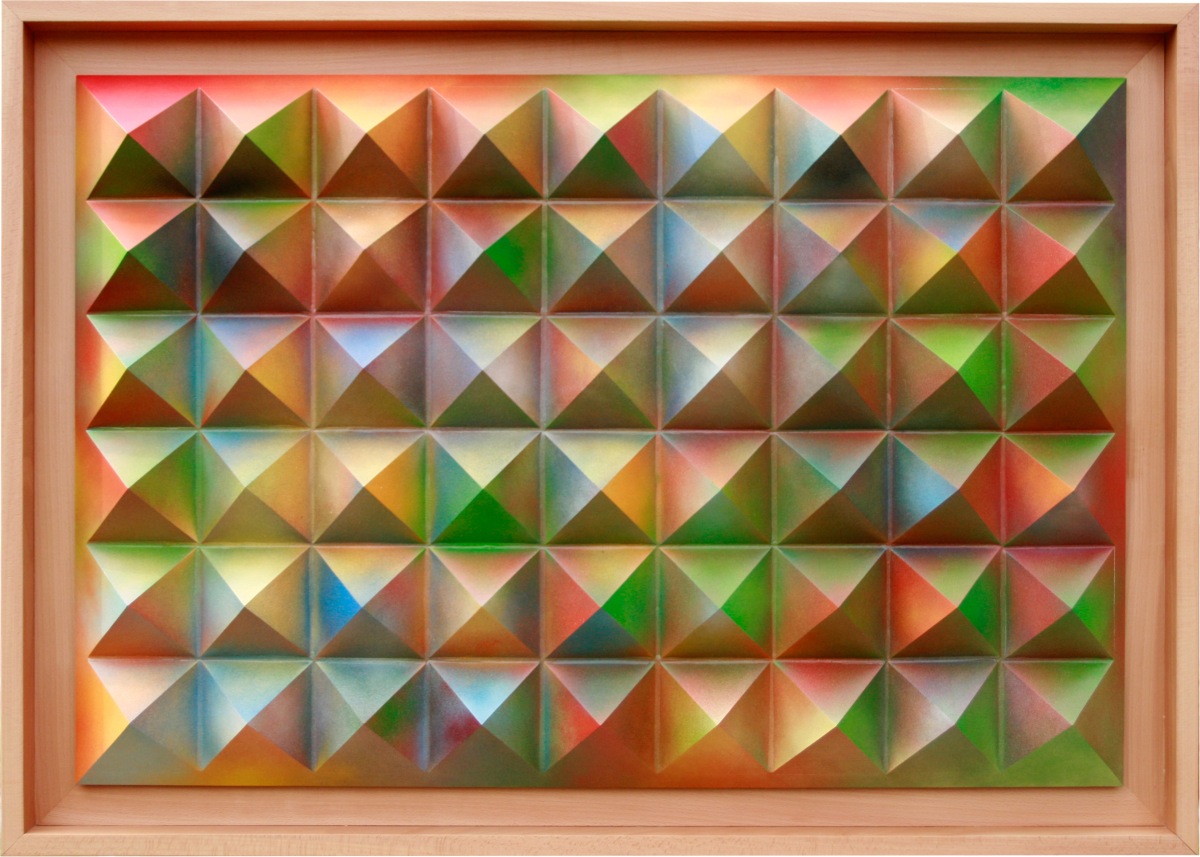 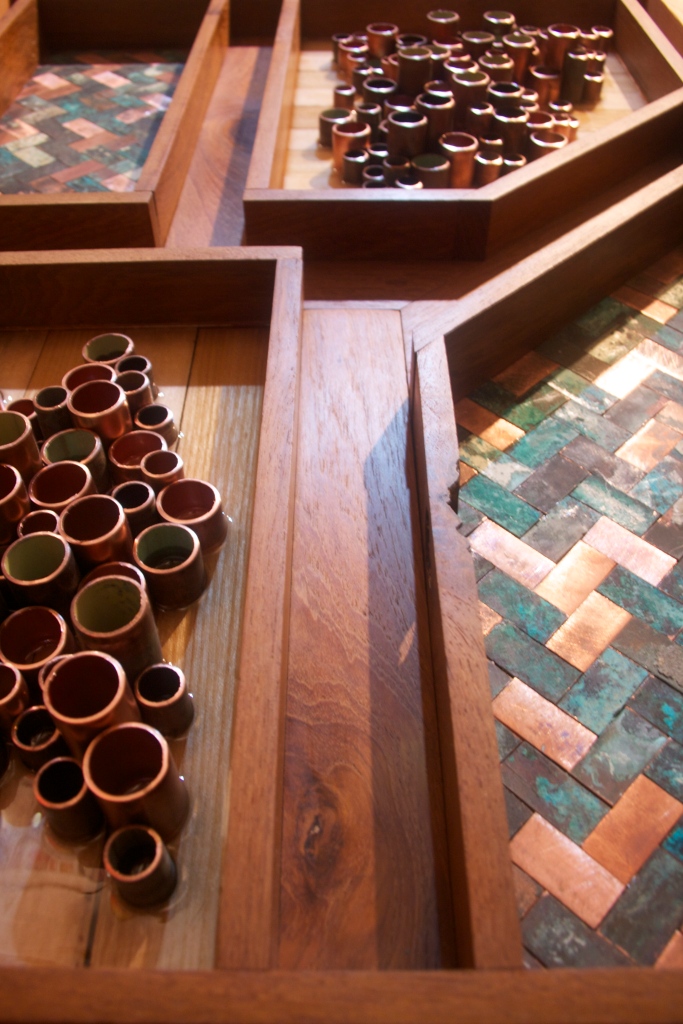 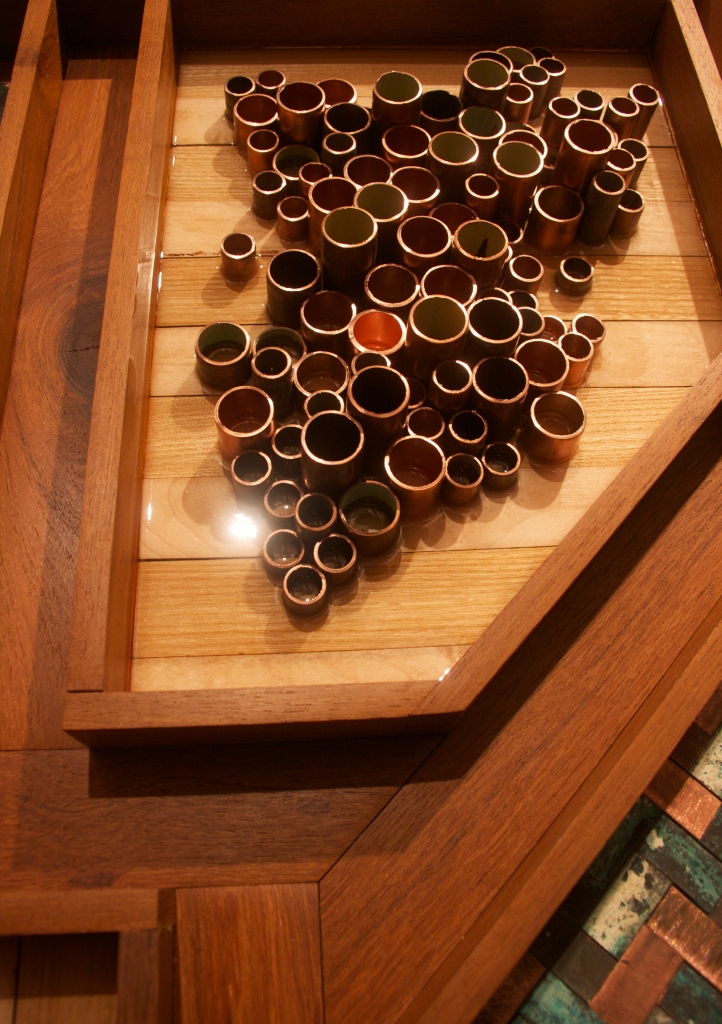 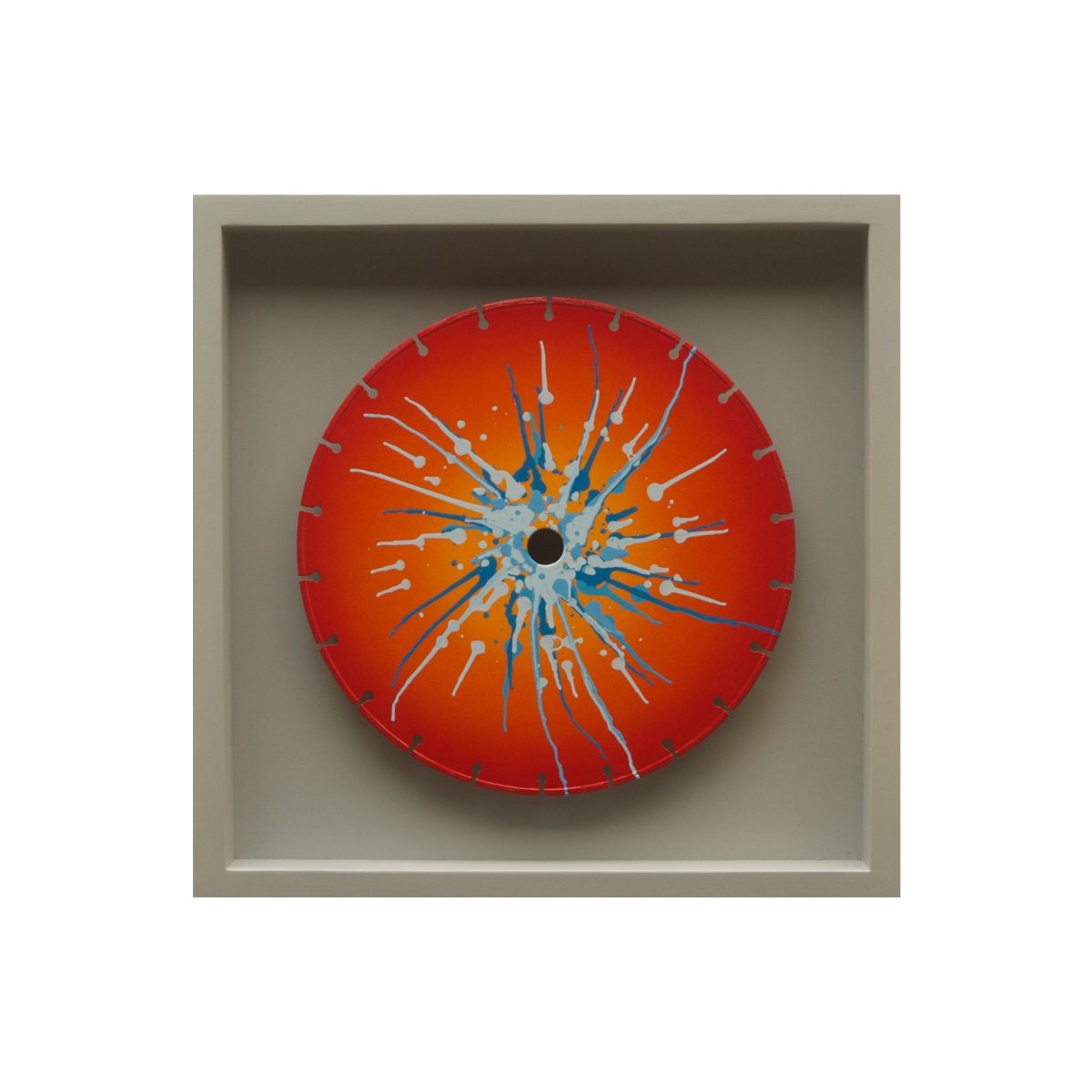 This was my second year at Nuart, a festival of street art and graffiti, where once a year for a week the streets come alive with spray cans and scissor lifts as artists from around the world meet to make their mark.  This has been happening for 15 years now and many of the large murals remain from past years turning the city into a museum and boasting an impressive list of past participants.  The week finishes with the opening of an exhibition and a party held in Tou Scene an old disused brewery. 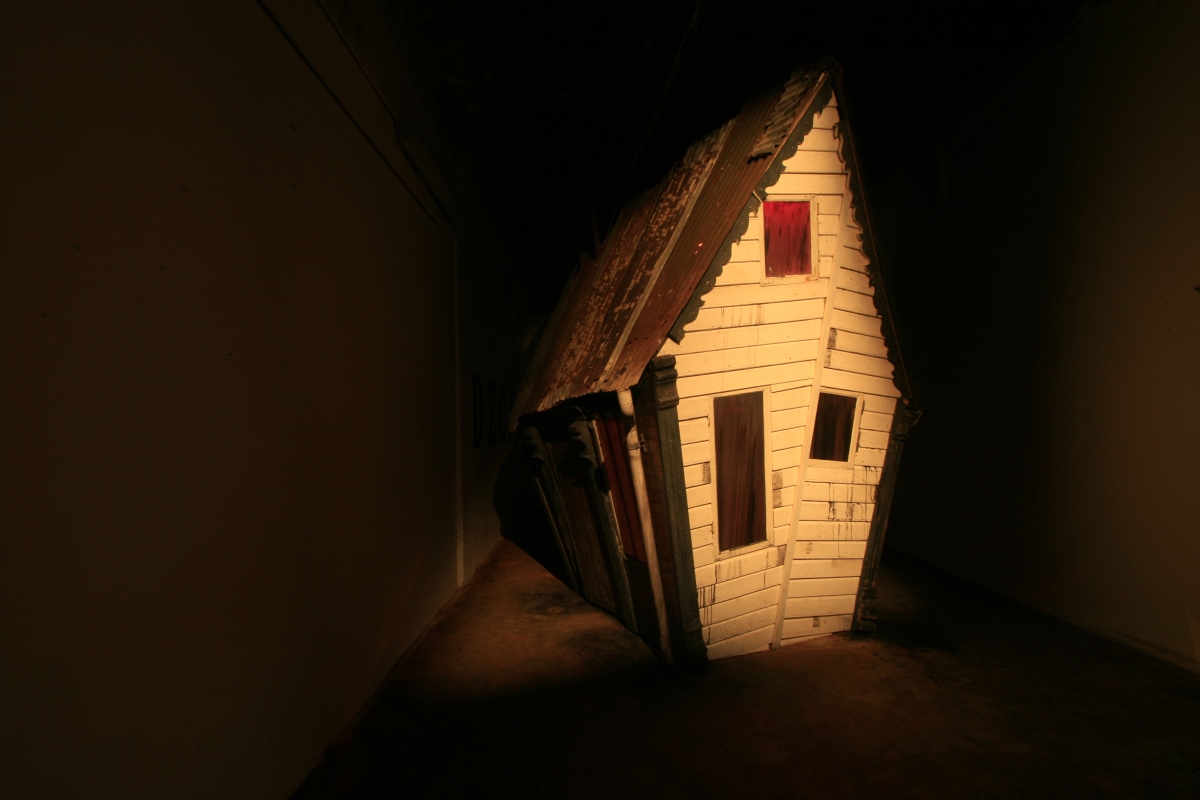 Last year I was invited by Dotmasters to help with production as they have quite an enormous task and not much time and could do with my experienced hands building things and rigging lighting.  The Norwegian hospitality is first class so I arrived, with not much sleep and a bag of tools to get stuck in with Nuart 2014.

I made hints about how it would be good to come and paint at the festival for 2015, I was told I had to have a pretty stirling year for that to happen, which was fair enough comment but I was planning to have a good year – I always do!  As it happened 2014 would see my artistic input to Nuart.  There had been a conversation about building Borondo a little house for him to paint the glass of the windows as part of his installation.  So Dotmasters and Martin Reed asked me to build a little wonky house from bits of wood that had been salvaged.  A fantastic task to be handed, so my assistant, Epifany and I started creatively constructing the framework whilst volunteers drove around the city on the hunt through skips for bits of timber cladding from old houses.  We built the structure, fitted the windows and clad the walls, we just needed something for the roof.  Einar found, in an unused room of the brewery corrugated iron that had once formed the roof and had been rusting for years, stained brown and green it was absolutely perfect.  We finished it off with details found on the local houses that was salvaged from the streets.

The house was finished and it looked fantastic the only problem was when the artist saw it he really did not like it as the house would detract too much from his own work.  This caused problems among the curators who asked some of the other artists if they would put their mark on the house, however they all declined, and complemented the house; saying the house was strong enough as it was and would not benefit from something else.  If only Banksy made it said Martin.  And he is right if Banksy made it we could sell it for a fortune.  But unfortunately Banksy didn’t make it, Liam and Epifany did.

We had in hand the stencil alphabet of John Fekner, who unfortunately was not at the festival as he had broken his leg, he was happy to be associated with our work and his letters would be a perfect addition to the piece.  Using his stencils we fittingly painted DECAY on the wall next to the house, referencing urban decay, the the divide in privilege, the opportunities that arise out of it for artists and the gentrification that follows.  Something echoed in the story of Tou Scene where Nuart holds its exhibition. Then using set painting techniques painted the house and dirtied it up as a final touch and since it was a late addition and not properly curated my name was name would not appear in any of the press or literature so I subtly drew my tag on the side of the house for good measure.

So I squeezed my way into Nuart 2014 lets hope I get invited back for some more creative input next time – but I have to have a stirling year!

The circle is a form that has appeared in art for hundreds of years, there is a fascination with its symbolism relating to religion and the cycle of life and more recently within geometric art, and always concern for its perfect execution.  These circles are all painted and presented on found objects 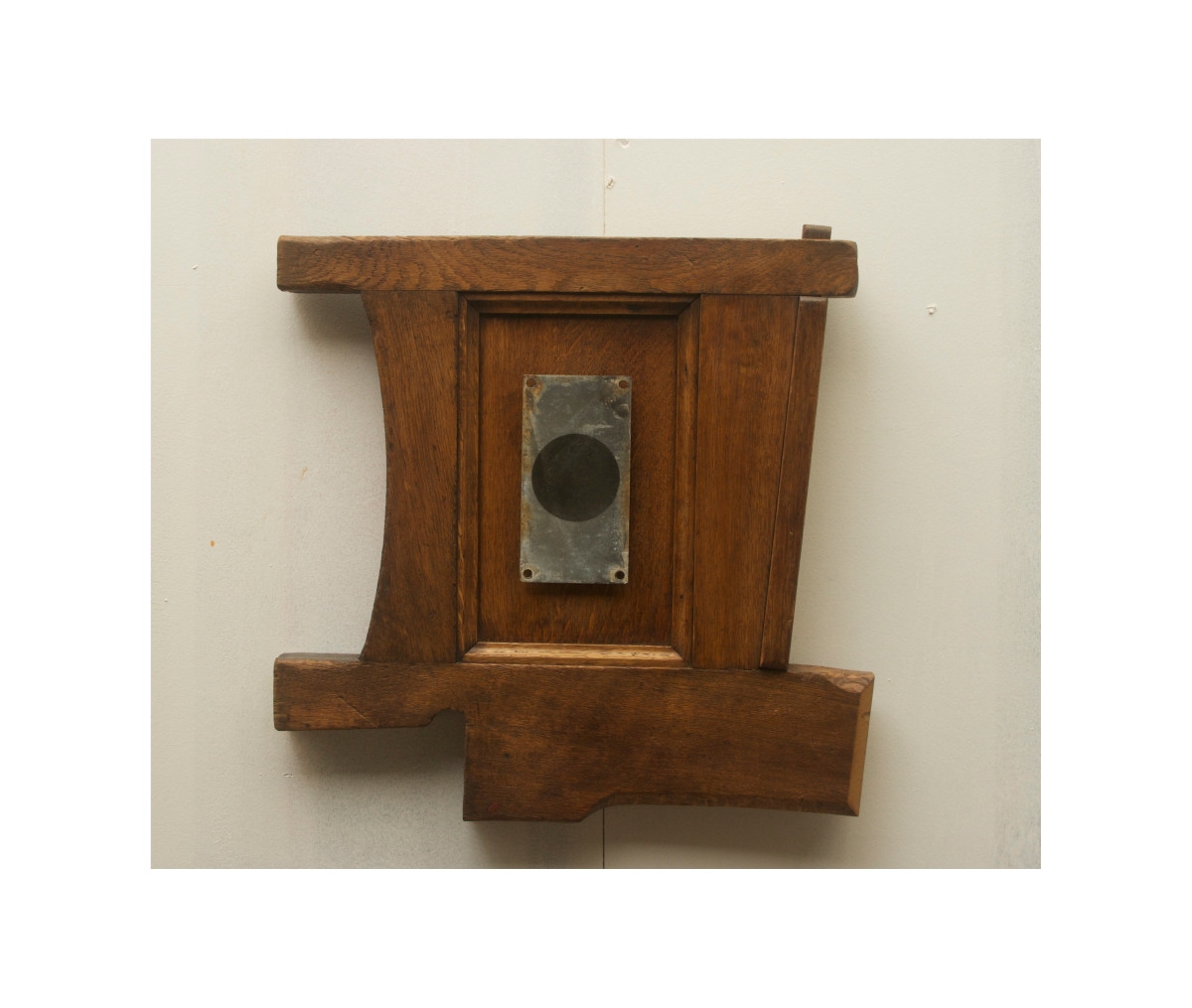 We always do something crazy at Glastonbury festival.  A few years ago Wreckage myself and crew turned an old display pod on hydrologic legs into a preying mantis space ship vodka bar, that Lyle DogHead made a beautiful pair of wings for, which gently moved up and down.

This year was much more sensible, I painted a car planted into the mud with a giant baby doll planted on the top.  I initially was going to paint a colour fade over the car, starting with dirty browns and greens, then moving through the colour range, painting the top of the car the colour of the sky.

Then Sam Hagerty placed an over sized childs doll on top which made me reconsider.  Not convinced I had the right idea I visited the field in the dark of night to see how the absence of sunlight changed the vista.  This car was right at the entrance to the field and I was painting alongside artists like Chu and Dotmasters so I had to do a good job or my face would be rubbed in the mud.  Chu was theming his car around the contentious subject of fracking, which inspired me to paint something more than just pretty colours.

I decided to paint white over the majority of the colours I had already applied, leaving only the browns and greens at the base of the car.  A symbol of nature and of earth, the white being a symbol of innocence and purity.  The baby also a icon for innocence and purity placed on top of the car as if a sacrifice on an altar would be painted black as if dipped in oil.  The oil runs down the car in big thick dripps symbolising the blood of the planet.  The car as symbol of the state of our species development, sacrificing our future for the pleasures of today.  The meaning of innocence behind the use of white become a statement of our nievity as we relentlessly poison our planet and condemn our children to an uncertain future. 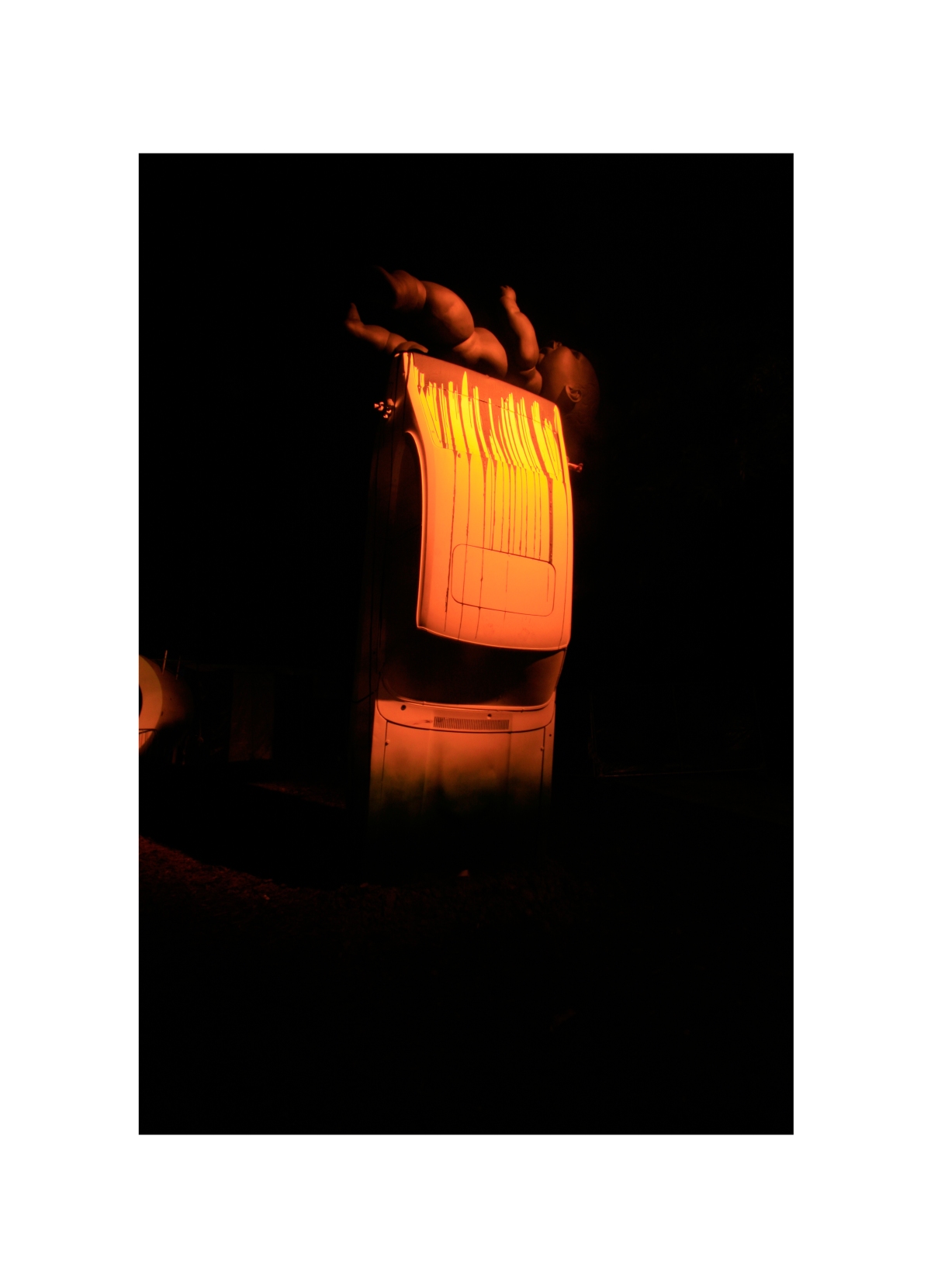 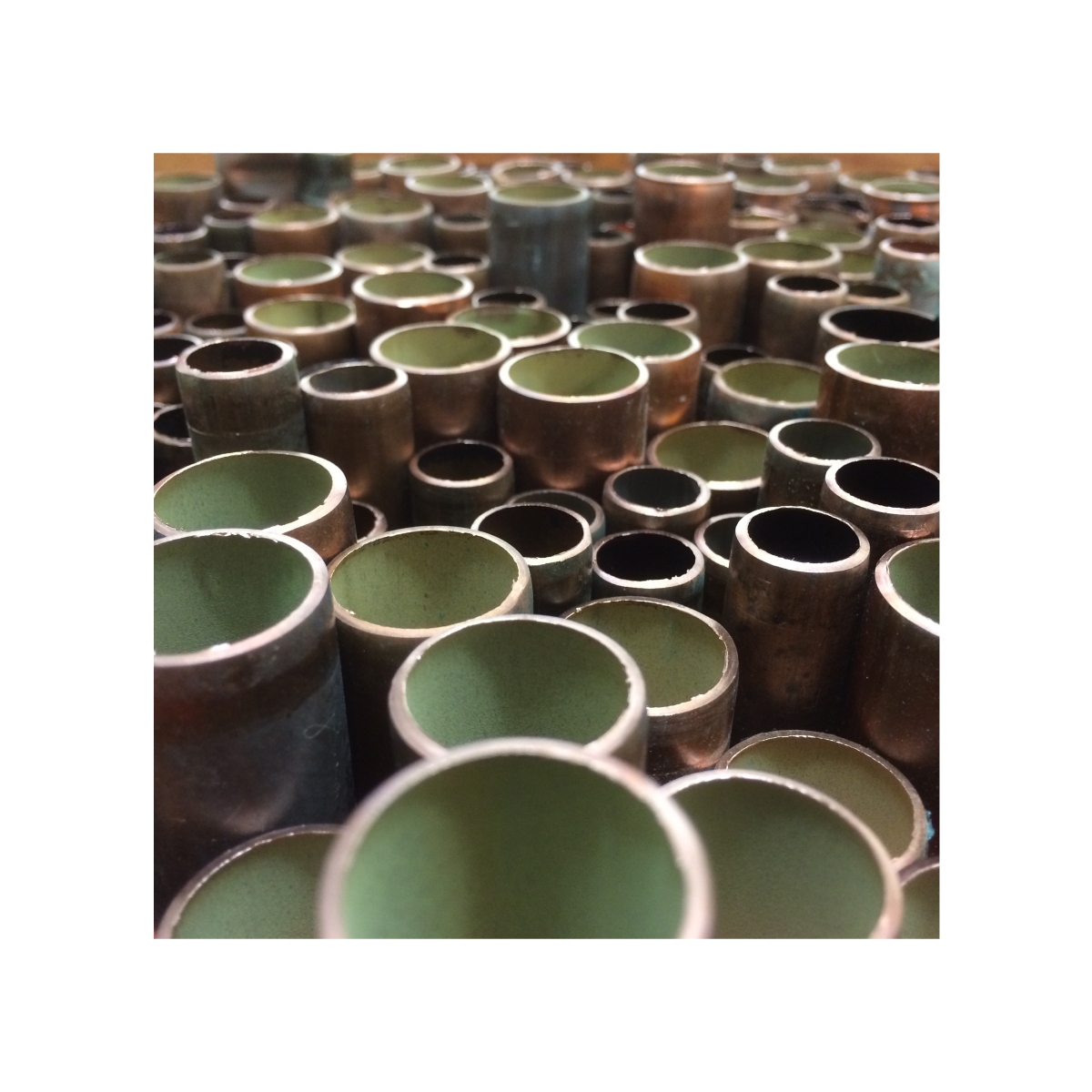 This was a while ago, but a piece I am proud of having painted and indeed an exhibition I was proud to have been invited to be involved in was the Schoony boy soldier show.  I have another cast waiting in the studio for me to paint – just need to set a month aside to complete it.  One to watch out for in 2015! 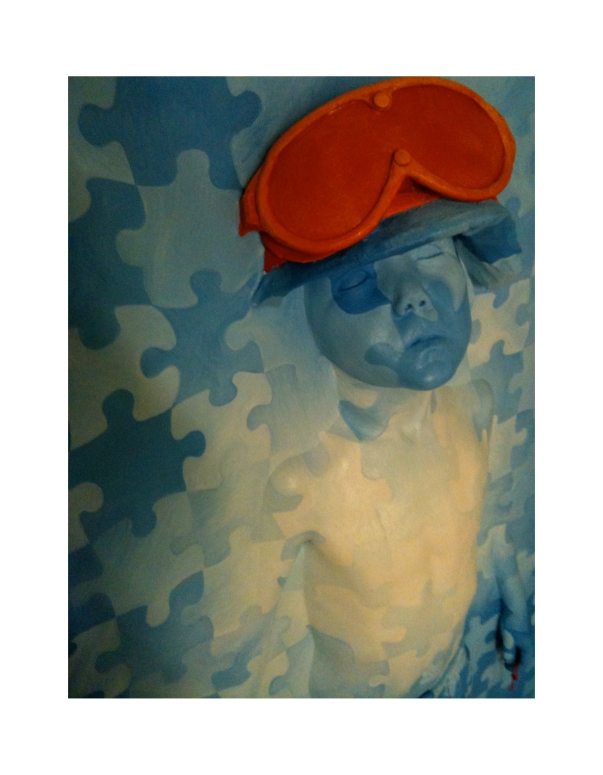